Left for Dead on the Road

In my last update entitled, “Our Brother Is Alive,” I shared with you the inspiring story of how one of our native missionaries saved the life of a dying, unreached, Sudanese man and changed his tribe forever. I am delighted to tell you that Zachariah’s journey with Jesus is not over; in fact it has just begun.

Overwhelmed with joy, Zechariah sat and remembered that it was only a few months ago he had almost died of an illness. His new Lord and Savior Jesus Christ sent a missionary to his tribe to rescue him. He fondly remembered this missionary’s undeniable love. He thought about how love led him to open his heart and ears to listen to the missionary’s simple story of Jesus’ sacrificial death for his sins to provide him complete forgiveness and the assurance of eternal life. It did not take long before Zechariah’s pleasure was interrupted by the countless faces that flashed through his mind of family and friends that had no knowledge of Jesus. He desperately wanted to share this life-changing message with every one he knew. So with child like faith he began to pray, “Lord, my tribe has no written language and I will probably never learn to read or write. I want to learn about you but I don’t understand that book that the missionaries read. I want to tell everyone about your love, but I do not know how to. Help me Jesus!” 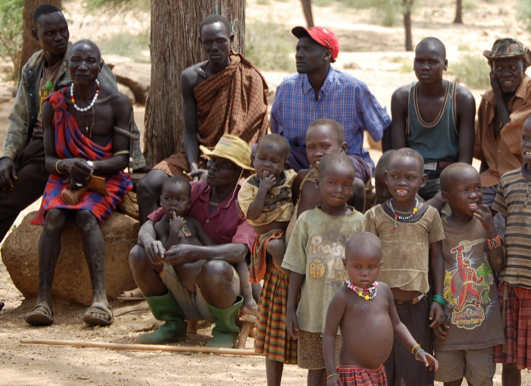 Not long after this, Zechariah asked James Nyika, an Ends Of The Earth native missionary, if it were even possible for him to learn more about Jesus and the Bible. Zechariah explained to James that God had given him a passion to evangelize. James responded, “Yes brother, God has answered your prayers! Next month we will teach you to memorize key Bible stories as you hear them being read aloud. You will also learn how to share these stories with your people in an oral Bible study.” Once again, Zechariah was in awe of God’s intimacy and miraculous answer to his prayers.

I had the privilege of watching God reveal Himself to Zechariah during this training. We broke up the class into small groups and assigned each group a Bible story that they were to memorize and retell in their own language and cultural reenactment. James and Zechariah’s group were given the story of the Good Samaritan. As James read the story out loud, Zechariah sat and listened intently, as this was his first time ever hearing it. When James was finished, he asked if anyone in the group had experienced something like this. James noticed Zechariah timidly raising his hand. Unaware of what he was about to share, James asked him to come forward and tell his story. Zechariah stood up and looked directly at James and declared, “I was the man left for dead on the road, and James, you were the good Samaritan.”

Zechariah was chosen by his small group to reenact the story of the good Samaritan in front of the entire class. Everyone sat in amazement, as we watched this illiterate man, that had just recently been introduced to the Bible, perfectly dramatize the story with deep passion. He captured the heart of the story better than anyone else, because he had personally experienced God’s loving touch in such a similar way.

Zechariah is presently a missionary-in-training under Ends of the Earth Ministries. He will be attending an oral Bible college with other illiterate tribal leaders to prepare them to reach their own people and the neighboring villages almost immediately. Please pray that God will use Zechariah to bring the message of eternal salvation to all the tribes in his area of Sudan. A handful of his fellow tribesmen have followed in his footsteps and have recently given their hearts to Jesus Christ.

Jesus said,
“Love one another: just as I have loved you… By this all people will know that you are my disciples.”
John 13:34-35

On July 1 we opened a medical clinic in Zechariah’s region of South Sudan to show the love of Christ in an undeniable way. This clinic services five totally unreached tribes with an estimated population of 1 million people. Almost 50% of the children in this area die before their fifth birthday as a result of simple diseases that can be cured for less than one dollar. Please consider financially supporting the medical clinic.

We need to raise $2000 per month to supply the medicines and native missionary medical staff essential to show the tangible love of God that Zechariah experienced to these desperately lost and hurting people.

Isaiah 9:2 “The people who walked in darkness have seen a great light; those who dwelt in the land of the shadow of death, upon them a light has shined.”
Acts 13:47 For so the Lord has commanded us, saying, “I have made you a light for the Gentiles, that you may bring salvation to the ends of the earth.”