Given a Chance to Live

In 2014 the president of Sudan dismissed his vice president from his office. The vice president responded by gathering soldiers and forming a coup which cost the lives of 50,000 innocent civilians. The war is still raging and makes ministering in this area extremely challenging. Our national missionaries have to travel hundreds of miles through “lawless” sections that are controlled by bandits in order to bring back the needed
food and supplies for our children and medical clinic. Our African director, James Nyika, has come upon several places where bandits had
recently attacked and killed innocent civilians, leaving their bodies along the road. Due to the war and famine, the United Nations have now placed South Sudan at the top of the list for the world’s worst country to live in.

In the midst of this devastation we have seen God do miracles. Recently, 3,000 out of the 12,000 children who have been forced to serve as child soldiers have now been released. We are witnessing the largest demobilization of children in history. 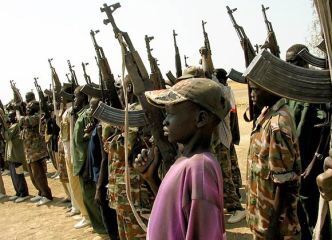