Run For Your Lives

Last year, two large tribes fought a deadly battle in front of the little Tauso Village that our Ends of the Earth missionaries minister in. The sound of machine-guns fired in every direction and people ran for their lives. The Tauso adults fled to mountain slopes to find shelter in the rocks; abandoning the children in the care of their Sudanese school teacher, Robert, and other Ends of the Earth native missionaries. As the week progressed, continued reports of people falling victim to revenge killings in the vicinity caused the entire tribe to permanently abandon their make shift tent village and flee for refuge to the top of the mountain. James Nyika, EEM’s Sudan director, began a tireless effort to gain approval from the governing officials to build a school dormitory for the kids in a safe location. Through the prayers and sacrificial gifts of the body of Christ, the “Promise Child Dorm” was recently opened providing school and a new home for the Tauso kids. 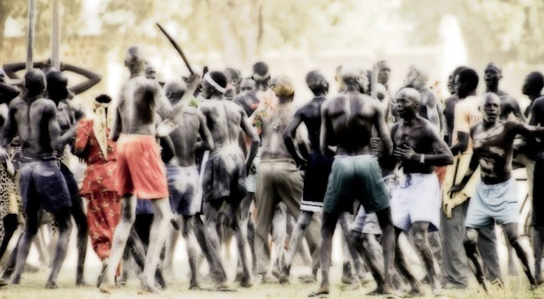 With hearts overflowing with joy at the news of the long awaited school dormitory, the Tauso kids immediately gathered what little possessions they owned and set off on the difficult journey from their mountain hiding place to the rendezvous location near their old village. Their three day journey down the mountain began without any incidents. Unfortunately, just before they arrived at the meeting place to board the one-ton truck that would carry them to a new home, the group crossed paths with cattle raiders. Suddenly, they found themselves face to face with fierce men carrying AK-47s strapped around their shoulders. These raiders shoot and kill any one that can identify them because stealing cattle is punishable by death. In the panic and chaos, children ran screaming, cattle stampeded, and men shouted as they raised their weapons and chose their targets. Just days before he was to arrive at his new home and future filled with opportunity, one of the young Tauso boys was shot and died of his wounds on the side of the mountain. Overwhelmed by fear and in shock, nearly thirty of the younger children returned to their refuge at the top of the mountain. After several months of searching, James was able to locate twenty youth who had scattered after the violence to surrounding villages. 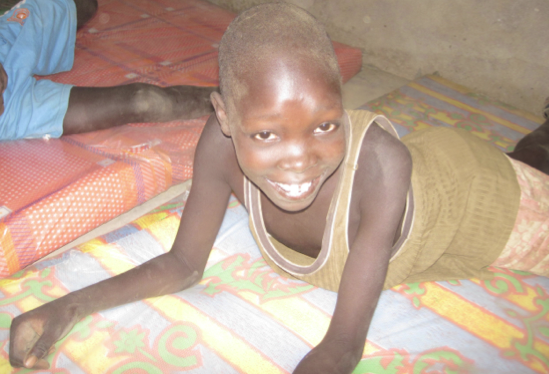 “Who can belief this? We have our own beds!”

As they rounded the corner, the children’s dreams became reality as their eager faces peered out of the truck and got a first look at their new home and school. Some touched the concrete structure, and wondered at the building since all they had known before was a home made of mud and sticks. Wide grins spread across the children’s faces as James opened the door to the dorm rooms and the children saw beds. On top of each mattress they found school uniforms, new shoes and folded bedding. Because of your support, these precious children wake up each day knowing that they are in a safe environment, will have three good meals, a Christian education and have missionaries who daily love and disciple them.

James is doing all he can to facilitate safe passage for the children who are still on the mountain. Please pray that all of these children will be able to join the other students and begin a new life. 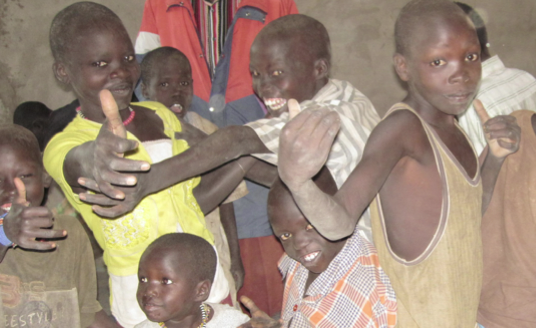 Dancing with joy in their new home 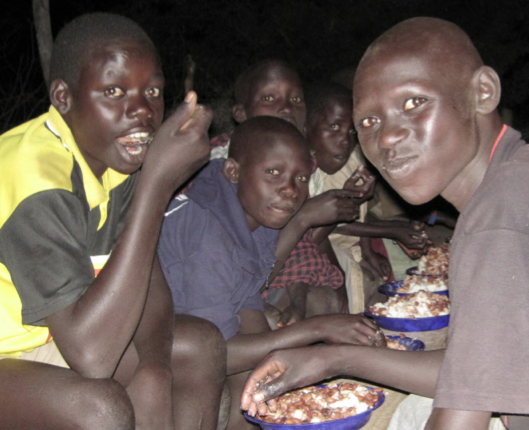 Recently a large group of Taposa men attacked our chief medical officers home. He responded with God’s love and total forgiveness. As a result we are witnessing God soften the hearts of many unreached Taposa. Please consider financially supporting the medical clinic and help our native missionaries bring God’s love to these desperate people.

We have almost reached our goal. We still need to raise $500 per month to supply the medicines and native missionary medical staff essential to show the tangible love of God to these lost and hurting people.

Support Ends of the Earth